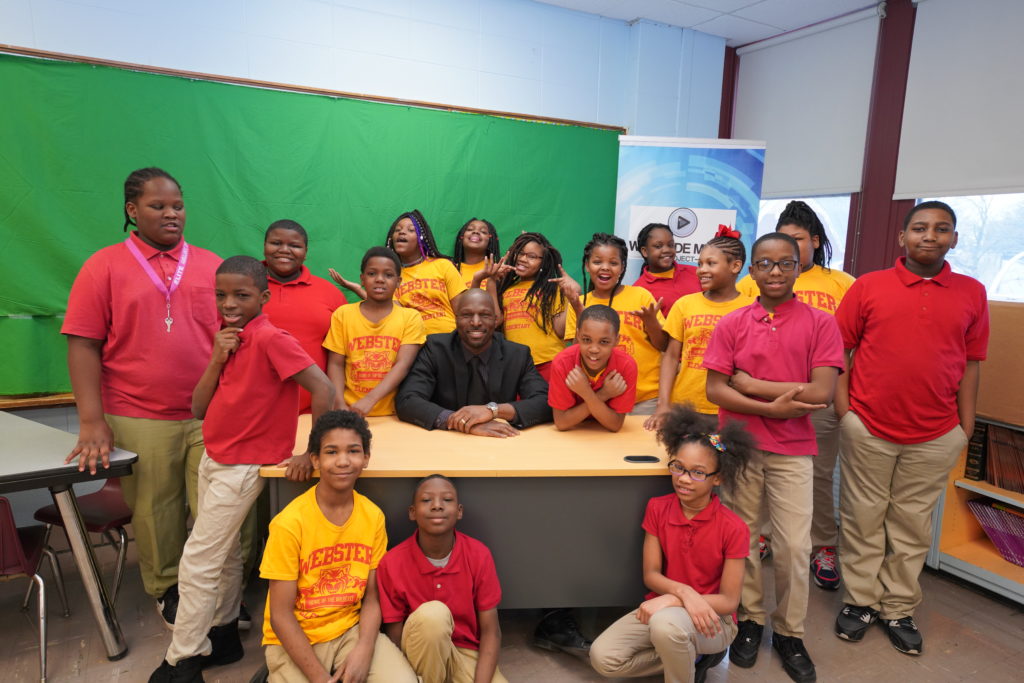 Chicago Public Schools graduate Khalid Oluewu, now principal of Webster Elementary in North Lawndale, likes to offer his own story as living proof of what is possible for his own students. Growing up in a low-income, Nigerian-American, single-parent home in Uptown, Oluewu learned responsibility very young. As a student at Arai Middle School (now Uplift High School), Oluewu got his first chance to tutor and connect with younger students. The joy of that experience spurred him to continue tutoring and mentoring while at Lincoln Park High School.

But “Mr. O,” as he is known today at Webster, didn’t always have school principalship in mind. He earned a college degree in computer information systems and did a stint as a computer analyst before changing careers. In 2006, he joined the highly selective Chicago Teacher Fellowship program and began teaching math at Faraday Elementary, not far from Webster.

“There was nothing in school that prepared me for that first year,” he said. “But by year three, I started to find a groove, and by year five, I would say I could go anywhere and own the classroom and impact scholars in a positive way.” Indeed. His Faraday students earned acceptance to selective enrollment schools and achieved exceptional scores on high school algebra placement exams. Mr. O proudly recalls a former student who tested at Whitney Young and jumped two math levels based on her score.

Not only does Mr. O hold his scholars to high accountability and expect them to take advantage of opportunity, he holds himself to the same expectations. Once he decided to move into school leadership, he persisted through every obstacle. It took two tries for him to be accepted into the New Leaders principal preparation program. But as an assistant principal at Oscar DePriest Elementary, he helped move schoolwide math achievement from the first to the 50th percentile in a single year. Likewise, it took Mr. O two tries to earn CPS principal eligibility, but now, in his third year at Webster, students are making outstanding gains on NWEA. In most grades, they are also reaching grade-level attainment in both math and reading.

Mr. O has also worked hard to establish social-emotional learning and restorative justice practices throughout the school to reduce suspensions. In 2017, no children were suspended and suspension rates last school year were very low.

“I didn’t know that it would be this fast into the principalship, but I’m here. And I’m learning.” With the biggest smile, he adds, “And it’s still kicking my butt.”

Q: What was your focus when you got to Daniel Webster?

Culture and climate were the priority. I focused my first year on culture building and getting familiar with staff. Daniel Webster had already done a lot with student growth, but attainment was still an area for improvement. At the time, they were doing better in reading than math, but [now] math has improved to the 84th percentile, while reading still has a bit of an edge, at the 96thpercentile.

With our math block, the structure is a 50-minute breakdown for K-5 and 70 minutes for middle school. We have a fluency piece, a math talk, a core lesson (with a mini-lesson, guided practice, and independent practice), then small groups with an assessment piece to culminate. I fleshed this through with teachers to discuss what it may look like in the classrooms. In the first year, we saw a 15-20% growth.

We also strategically placed an intervention/enrichment portion of the day where everyone is engaged in either an intervention or enrichment piece tied to the NWEA assessment. And we do have an aspiration to have the algebra program here, as well.

The culture shift was the proposal of three commitments:

Q: How have you kept student achievement high?

Building relationships will go a long way, and holding them to high expectations. It doesn’t matter the neighborhood. Each neighborhood is going to pose its own set of challenges. I think our job as educators is to focus on what we can impact. To move schools, we have to focus on what we can control within the school. Hone down on what is practice and research-based. This way, you should be able to move student achievement in any community.

Q: How do students engage in social-emotional learning (SEL)  at Webster?

Second Step is the SEL curriculum at Daniel Webster from pre-K through eighth grade which has different character-building activities within the programming to ensure scholars know how to manage themselves independently, and that they know what to do when they feel anger.

Also, we partnered through Communities in Schools to have a counselor who comes four times a day to service 60 scholars, most of whom teachers, administrators and even parents referred to be seen multiple times a week.

Every Monday, we have what we call Empowerment Sessions for middle school scholars where we have relationship building, discuss things that are worrying them, talk about their teachers and what’s going on in their lives.

Q: How do you keep suspensions so low?

We don’t hold children from recess or field trips or anything punitive. If we’re gonna punish, there has to be a punishment that matches the infraction as well as a reflection piece. Otherwise it serves no purpose.

We have a reflection room for children who may need to be removed from the classroom where the child can write about their feelings. If this keeps occurring, we’ll have a parent teacher conference that I’ll attend to make sure they understand the severity of the circumstances and work together to address the concern.

Ensuring that they have outlets. PBIS: out of uniforms, skating, bowling, and a dance that kids buy into. Being proactive with monitoring scholars, ensuring that adults know how to monitor scholars. Everyone has a job to build relationships and that goes a long way to keep suspensions low.

If we do notice some scholars are being a little over the edge, we’re proactive in wrapping our arms around them.

Q: Is there anything else you’d like to talk about?

I’d like to dispel the concept of “the achievement gap” because it’s really an opportunity gap. If scholars that live in this neighborhood were afforded the same opportunities as others, we wouldn’t see that disparity in terms of achievement.

Opportunity is really what I’m trying to afford our scholars with, just a wide range of exposure. I know that I can’t wait around for it, that’s why I do a lot of grant-writing and partnership-building, to afford them with opportunities. They’re gonna get everything and then some. That is my goal.